Meet The Cruise Ship With An Underwater Lounge

Meet The Cruise Ship With An Underwater Lounge 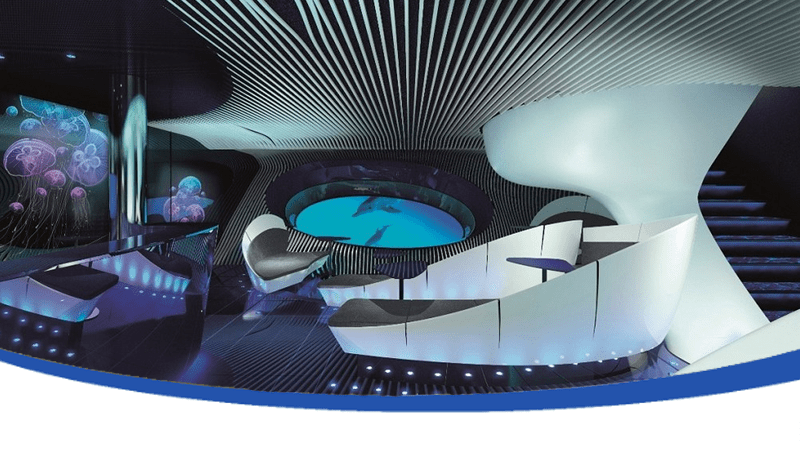 When you set sail on a cruise ship, the last thing you really want to see is something below the waterline, but one cruise line is planning to change that mindset.

PONANT’s pioneering Explorer class of ships, which consists of Le Lapérouse, Le Champlain, Le Bougainville and Le Dumont-d’Urville, will be the first ships to ever have an underwater lounge.

The Blue Eye lounge, located within the hull beneath the water line, will amaze travellers with breathtaking views of underwater sea life. The lounge has subtle graphical references that evoke cetaceans and jellyfish. All focus is drawn towards the two giant portholes, shaped like the eye of a whale. Relax in the lounge with a drink in hand as whales and sea creatures swim by the large eye-shaped window. Live footage from three strategically-placed cameras around the ship will also capture underwater action, such as dolphins playing in the bow waves. These will be projected onto digital screens throughout the lounge.

French architect Jacques Rougerie, who designed the innovative lounge and is deeply passionate about the sea, explained: “In my work, I have always had my heart set on making people aware of the role that the sea has played in the history of humanity. I designed this multi-sensory underwater lounge in order for it to become enshrined at the heart of the PONANT philosophy. I set out to discover this fragile and exciting ocean world, which covers 71% of the planet’s surface and remains a huge mystery for mankind. The destiny of the civilisations to come will be born from the ocean.”

Offering a subtle blend of refinement, intimacy and comfort, the new ships will boast just 92 cabins and suites, elegantly designed, spacious and with lounge areas that open onto the outside. An infinity pool overlooks the well-equipped marina at the back of the ship which will offer a variety of water sport activities.

A Ship Visit Aboard Oceania’s Nautica

Top tips for booking your 2018 holiday

Many thanks to OWT for arranging our cruise, everyone was so very helpful and nothing was too much trouble, even to making sure special diet requirements were catered for, and the bottle of bubbly and chocolates in our cabin was a lovely surprise, will definitely book with you again. Thanks to Natalie and all the staff