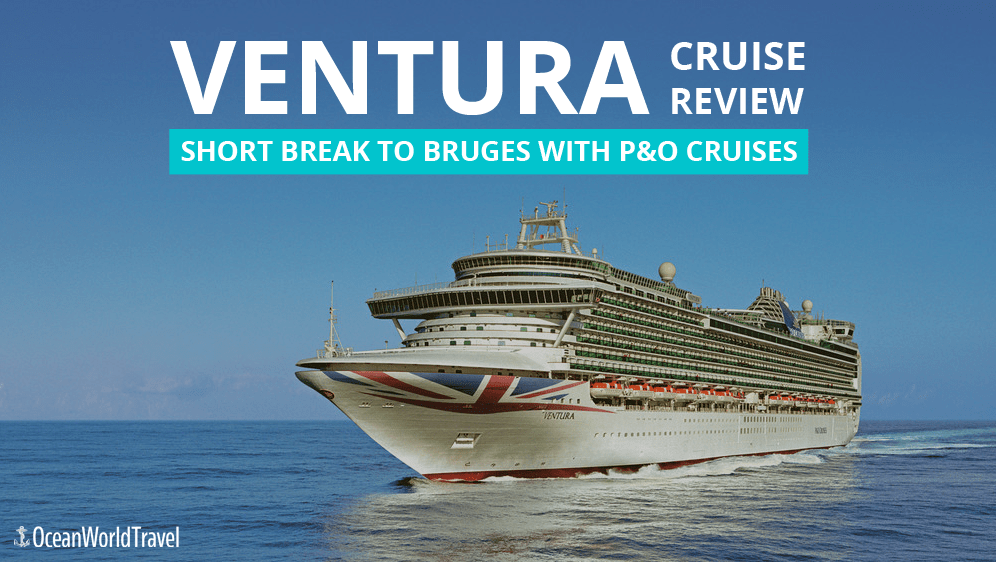 Going on a weekend cruise is the ideal way to break from the routine – especially if you live in Southampton where the port is literally on your door step! I recently went on my first mini cruise from Southampton to Bruges, on board P&O Cruises Ventura. Here is my cruise review.

Day 1: Southampton to Bruges on board Ventura

We embarked on Saturday at 3.00 pm and I was full of excitement to see what the ship had to offer. The queue at the terminal was quite long but it didn’t take too long to be checked in. I know Ventura is a larger ship, so I did expect a bit of wait. [Read Ventura Ship Review]. When I embarked, I went straight to my cabin to have a look around. The cabin was a double interior and I must say, it was quite spacious. I was especially happy with the walk-in wardrobe!

After my quick look around, I went to the top deck as we heard some music. The sun was shining and there were lots of people there, all up for a great time with the party atmosphere in full swing with a few stag and hen do’s. When a ship sets sail it’s always a great celebration and a great atmosphere. This was no different.

After this great start to the cruise, I went back to my cabin to get ready for the evening. The first stop for the evening was The Glass House for a pre-dinner drink. P&O doesn’t provide a drink package, however drinks are reasonably priced with cocktails ranging from around £5-6 which I think reflect what you’d expect to pay in a trendy bar. The Glass House is a special place for wine lovers as there is a wide selection of wines to choose from and taste. I however decided on a delicious cocktail with elderflower and gin.

We went for dinner in the Saffron Restaurant (Freedom dining 7pm to 10pm), which is one of the main restaurants. There are other dining options on board with a wide choice of eating including the Waterside Buffet, Bay Tree Restaurant, Cinnamon Restaurantand the Poolside Grill. There are also some speciality dining venues: The Epicurean at The White Room, Sindhu at East, The Glass House and The Beach House. We were quite lucky as we were served very quickly without queuing and also got a table for two. The menu was varied with rather traditional British dishes, and everything was delicious!

I had a cold starter of salmon fillet, my main was a portion of chicken with roast potatoes and garlic butter. The dessert was a orange chocolate souffle which was fantastic! Throughout the dinner there is a sommelier ready to serve you the best glass of wine for your meal.

There was a variety of entertainment on offer after dinner, which included jazz music, karaoke, and chart music. The main entertainment show in the Headliers Theatre was called Paradise City. There were two performances at 8.30 and 10.30 to allow everyone to enjoy the show no matter your dining time. We went along to watch “Let There Be Rock!”, a rock musical featuring some of the greatest rock songs from legendary bands such as Queen. The show was very entertaining with a lot of guest interaction.

After this, we went to listen to the performer Portia Emare, who starred in Mamma Mia and The Lion King in London’s West End. Her voice was divine, with some great covers of Adele and Beyonce. Another good song choice was “New York” by Alicia Keys which was a song close to her heart as it was the city where her career started. Whilst watching Portia I tried another cocktail, However I have to say the service was quite slow. After this we went to the main buffet for a late snack and a fruit tea before bed.

One of the great things about an interior cabin is there is no chance of sun light in the morning, the best way to get a good night sleep!

Day 2: Southampton to Bruges on board Ventura

I was really excited to spend some time in Bruges as I have never visited Belgium before. We woke up quite early and had breakfast at one of the restaurants. I had salmon with scrambled eggs.

We didn’t book an excursion in Bruges so to get from the industrial port of Zeebrigge where to the ship docks into the centre of Bruges, we had to catch a bus and then a train. We didn’t expect a complimentary bus from P&O Cruises to take us from the ship to the nearest train station of Blankenberge. The journey on the train was very quick, around 15 minutes, and there is a special cruise passenger train ticket for €10 return. We were given a complimentary map of the city before we went to visit Lover’s Lake (Minnewater Lake), then on to the town centre. Bruges is really pretty and very picturesque, especially the buildings and canal. The weather really helped with it being a nice day, which we considered being very lucky in September.

Before leaving, we needed to do one last thing… have a waffle! You can’t come to Belgium and not try some sort of chocolate!

I have to say that the organisation of the bus from and to the port was really impressive. It is really nice to walk around Burges for a few hours and wouldn’t suggest to go on an escorted tour unless you want to know more about the history of the city, or go a little further afield. It’s super easy to do the basics on your own, even with limited mobility.

We were on the ship just in time for afternoon tea, despite not being hungry after that waffle. I wanted to see what an afternoon tealook like on board P&O Cruises. There was a variety of sandwiches and biscuits including scones, tea cakes, etc. Waiters were circling around the table frequently to serve more tea or food when you wanted it.

After tea we went to the pools and tested out the jacuzzi, however we didn’t stay long as we were excited about the formal night on board. First stop for the evening was a drink in the casino and to have a play on the slot machines. Formal night is always a fun experience to get dressed up in the evening.

For dinner, we went to the Saffron restaurant, unfortunately we weren’t able to get a table for 2 as they estimated a one hour wait, a downside to anytime dining, so we shared the table with a group of ladies. The menu that evening was amazing, in fact, there was a section with dishes curated by the chef Marco Pierre White! I tried the starter suggested which was a duck terrine accompanied by an orange tart. It was delicious, and the flavours were so different but worked perfectly together. I was also really happy with my dessert too – an Apple Tarte Tatin.

After dinner, we went to a venue with live music, followed by a quiet drink at the Red Bar. What I liked most about the wine menu was that there were suggestions by the wine connoisseur Olly Smith.

We wanted to have a rather early night, so we went back to our cabins, but the surprises were not over! We had a slight issue with our toilet and its flushing system. Eventually when we managed to get through to someone for their help we were given another cabin for the night. The staff were extremely helpful and understanding, it was just a shame how long it took to answer our calls. However, the new room was great and finally we could go to sleep.

On Monday morning, we ate at the Waterside buffet. There was a large selection of food. I had some porridge, toast and scrambled eggs. I also tried the vegetarian sausages which were really good. We were able to disembark earlier than 8.00 am and it was very easy to get off with no long queues.

I really enjoyed my short time on board Ventura and ashore in Bruges. I would recommend a mini cruise to anyone who wants to get a taste of what cruising is like, or anyone who wants a quick getaway. These weekend breaks are short enough to not miss much time off work, but long enough to break from the routine and unwind.

An Interview With Timothy Gallant From TV’s ‘The Cruise’

4 surprising UK ports you can cruise from